Playing one’s didgeridoo front view or sideways ? The debate was still going on a few years ago. Today, the majority of players agree: playing front view is the best of ways ! Sideways playing is only favored when very specific techniques related to Beat-box are needed. Here are some other arguments in favor of front view playing!

Front view enables a better articulation of the didgeridoo

I remember that afternoon in Australia, I was discussing this subject with Bob. With the corner of his lips, he said: “It is far easier to articulate by pay lip service than with the corner of one’s lips!” Try talking with the side of your mouth. You will see, that besides being funny, it is rather difficult to achieve! Front view playing definitely enables a better articulation.

Playing front view has the big advantage to focus the musician on what his doing . The cheeks are balanced and the muscles are building up in the same way. Watch a sideways player’s cheeks, one is often blown and rapidly becomes less muscular than the second one. Besides, if a person practices didgeridoo intensively, his/her smile can even become unbalanced! Which is not very aesthetic, as you will agree. 🙂 On top of that, the whole head is tilted. On the other side, a front view player’s head straightens up naturally. Finally, as the player is centered, the sound can come straight from his stomach. As a result, one can play didgeridoo much more readily. Voice, over vibrations and many other didgeridoo techniques are much easier when particed in the center.

Didgeridoo is not the only instrument in which a musician blows! Trumpeters, trombonists and all the fans of our Western music did not get it wrong : they all play front view. Yet, sometimes some are slightly quirky, in regards to the center axis, but it is extremely slight, nothing to do with our didgeridoo sideways playing.

And among the Aborigines ?

This is in my opinion the best argument. Look at an Aboriginal playing traditional didgeridoo, I speak here about Yolgnu yidaki player (thank you Stephen for the precision). You will soon understand that playing sideways is a white man’s mistake. Aborigines play front view and only front view . And in terms of experience, they have already accumulated a few thousand years of it … No comment. 🙂

Oh, and one last thing to conclude with. You will never find a sideways didgeridoo player in peace. They are always questioning themsleves about playing front view. They try to convince themselves that they will get to it one day. 🙂 And oddly, conversely, you will never meet a front view player who is thinking about trying to play sideways! So, my player friends, get in the center, it will change your life. 😃

And share your experience, your problems or your wishes in the comments ! I’d be happy to answer ! 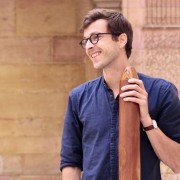